A Big Smell coming to Penyffordd? 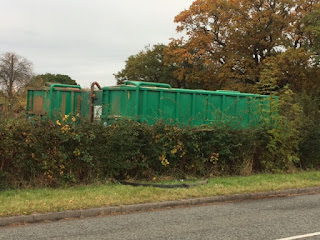 If we return to standard wind patterns I won't be smelling it at my house. These tanks are filled with "effluent" , the tanks shown at the top of the Vounog on the left. The effluent is sprayed on the fields.

Various substances are used. Some of them highly unpleasant, smells like dead animals. Not sure air borne particles from these operations are good for health.

Not a million miles from David's house......

If you see any of this crap in water courses, clue dead fish, take photos and contact Cllr Cindy Hinds or Cllr David Williams.

It's  against the law.

Bed time reading or maybe not..... http://digitalcommons.ilr.cornell.edu/cgi/viewcontent.cgi?article=1001&context=manuals
Extract: ( it's to do with workers who work in sewage farms )
7. Are workers exposed to diseases by inhalation? Inhalation itself may lead to a respiratory infection or the respiratory mucous laden with trapped pathogens may be swallowed so that the infection actually occurs in the digestive tract. Aerosols might contaminate food or water and lead infection in the digestive system. Organisms which can infect the lungs include Mycobacterium tuberculosis and some of the enteric viruses. It is difficult to study health effects from aerosols since the treatment plant is located within the area it serves: the ultimate sources of the pathogens in the aerosol are infected individuals in the service area. It is difficult to determine if the route of transmission for a disease was wastewater contact or contact with other people.

The amount and survival of microorganisms in wastewater aerosols depends upon the amount of the organism in the wastewater, aeration basin, or sludge; the amount of material aerosolized; what happens to the aerosol while in the air (such as drying of moisture or impact with a surface); and the die-off of the organisms with distance in the downwind direction. Even when these circumstances are known, interpreting the health risk from the information is difficult since it is necessary to consider what is the quantity of a particular pathogen required to start an infection in people. Bacteria and viruses are not necessarily evenly distributed throughout a liquid, but can concentrate in the in the surface microlayer. This affects how many organisms can be put into the air.

During aeration, when air bubbles break at the air-water interface, microorganisms are ejected into the atmosphere. The bacterial concentration in the ejected drops from bubbles may, depending upon the drop size, be from 1 to 1000 times that of the water from which the bubbles burst. Wind is the most important environmental factor that determines the aerosol spread of the pathogens. When in an aerosol, the survival of the organisms depends upon relative humidity, temperature and sunlight. These factors cause a die-off of microorganisms: the indicator organisms appear to be affected by this shock of aerosolization than are the pathogens, (Pseudomonas, Streptococcus, Clostridium perfringens, Mycobacterium, and enteric viruses.

Typically, indicator organisms are used to indicate the possible presence of associated pathogenic bacteria and human viruses because the pathogens are difficult to assay and seldom occur at readily detectable concentrations. Studies have shown that there can be a very poor correlation between pathogens and indicator organisms. Also, changes in indicator organisms may not relate to changes in pathogen concentrations. Fecal streptococcus may be a better indicator for aerosolized wastewater. The measure of the spread of pathogens by aerosols can be done rapidly and inexpensively by monitoring cyanophages, viruses that attack the blue-green bacteria (cyanobacteria).

The LLP-cyanophages are not fecal organisms but may be good indicators of water pollution since they appear in polluted water when pathogens are present, survive longer than pathogens (more resistant to chlorination than coliforms), and are detected by a simple test. Diffused aeration activated sludge causes little aerosol release of cyanophages in comparison to the mechanical aeration. A trickling filter also produces aerosols while the filter is in operation; the more filters a plant has, the higher the bacterial content of the air downwind of the filter. A study showed that both coliform bacteria and total organisms are higher in the air at night than during the day, showing the effect on bacterial death. Higher airborne levels of organisms were present when the relative humidity was above 35% or during high wind speeds.
at 15:43 2 comments

I think we should have them in the village
Morning rat run Chester Rd for starters.

Take the time to take part in their questionaire, it only takes a few minutes.

OAP gets knocked down outside the Spar

There's this sprightly OAP  I see about the village. Recently I've seen him limping, looking the worse for wear. I'm suspecting he has something I don't want to know about.

Anyway he got knocked down on the Spar car park by a reversing vehicle. Vehicle owner said it was his own fault for being on the car park.

Given such an attitude I would be asking for his insurance company. Noting car reg details and reporting him to NWP.

Of course when you get knocked down, the shock etc. kicks in.

I have an acquaintance who reversed into two girls. He ended up before a magistrate.......
at 19:24 0 comments

I think minus Paul Hollywood.

The junior winner was Ffion Brown, aged four, second was Henry Moore and third was Jack Mullin. The winner for the adult category was Jenny Russell, second was Jane Curtis and Julie Brown came third.
http://www.newsnorthwales.co.uk/news/168288/former-bake-off-contestant-steps-in-to-judge-fundraising-contest-in-penyffordd.aspx
at 14:29 0 comments

"Too many motorist parking on footpaths and pavements in Penyffordd. This makes a hazard for pedestrians and mums with prams. A bad habit that should not be tolerated by the police. "

Thank you for posting this, an important point especially around schools and the Spar.
NWP aren't interested in such minutae and are no longer responsible for enforcement. It will take pedestrian injury reported in the local media to get any action. Flintshire County Council are now responsible for such misdemeanors.

If you contact County Councillors Cindy Hinds and David Williams they will alert the appropriate dept within FCC.

Enforcement seems peace meal to non existent at the moment.
We won't talk about the cretin who blocked my drive for 15 hours............ Had to get NWP on that one. NWP did very well on that.
at 12:49 0 comments

We have BT Infinity. The box is in my office. I don't like sitting in wifi all day because its bad for you.
So I turn it off.

Funny how even though I turn it off it still works on Lisa's ipad.

Been scratching my head about this for a while. Thought Lisa might have been using next door.
But she isn't, she's using ours even though it says its switched off.

I'm reading that below which I hope will show me how to switch off the second. I suppose I could always surround it with a Faraday cage otherwise known as tin foil...................

postscript. Getting BT to turn off your wifi may prevent you using your wifi devices elsewhere. ie your mobile phone.

postscript: BT Wifi / Internet box now in old shoe box lined with multiple layers of aluminium baking foil.  Lid to be taken off when wifi is needed which is 5 minutes a day.
It works Lisa's portable devices can't get signal. We'll be staying with network cable.

Local Communities are organising themselves

Gone are the days when communities voted in  community councils then just left them to it. Hope, Caergwrle and Abermoddu have organised an action group just as Penyffordd, Penymynydd and Dobshill have.

Not sure if you can see the link below if your not on Facebook. If not its well worth joining, its quite easy to just put a few vague details down to join.

This week the above group met with senior planners to discuss development within Penyffordd district. A presentation was shown to the planners. Views and fears were communicated with regards over development of the village. The meeting a very important stepping stone.

Shortly all Penyffordd district will be receiving an anonymous questionaire asking them about many facets of village life, current and for the future.

I encourage you to take the time to look through the document, complete and return it to one of the designated drop off points.

A Saturday Morning Meeting is planned in The Institute shortly where residents can raise objections and exchange points of view.

Also further meetings are planned to take place in the British Legion in the near future.
at 09:53 0 comments

Cllr Clive Weed raised concerns over road safety outside of the Millstone Play Area.
at 12:58 1 comments

Cllr David Williams advised due to continued noise complaints from residents in proximity to the skate park he is making enquires of acoustic barriers. RESOLVED this will be included on the October Agenda.
at 12:56 0 comments

I was among'st a group the other night when water pressure was mentioned. I live in an old property with lead pipes, shared pipes so I expect low water pressure. Recent maintenance work by utilities has seen an improvement.

I didn't realise that water pressure is an issue on relatively new estates. It seems to be partly time related. ie. when everyone gets up in the morning water pressure decreases.

We still have one of those outdated cold water header tanks in the loft. So we can maintain a certain pressure. Modern water systems are not the same. How can it be that in a modern built house when someone uses the toilet that pressure decreases and someone in the shower suffers a drop in water pressure, the shower stopping due to low water pressure.

Cue google for Utility obligations. Post script to be added.