" Do you not think there is a need for such a service in the light of the latest proposals by ARRIVA. They have decided to reduce the service to Mold and Chester through the village by 50%. As of Monday the 10th April the bus service to Mold and Chester will be every hour. This was done without any consultation with the Community Council and from what I can make out without any consultation with the County Council. The buses to Mold will be 10 past the hour from the institute and on the Hour to Chester from the institute. They have also withdrawn our ONE AND ONLY BUS THROUGH THE VILLAGE ON A SUNDAY. How people are expected to get to work I don't know. "
at 10:58 1 comments

Cllr David Williams reminds me that nomination forms for the position of community and county councillor for the ward of Penyffordd need to be in by the 4th April to FCC.

I believe that at least four community cllrs are standing down this time.
Last time I looked there were positions for :-

David has forms if you want one.

Welsh Assembly Goverment out to lunch

Last Sunday there was a 13 mile queue on the A55 at Conway / Colwyn Bay due to lane reductions.
Plus gridlock off the A55. People were spending 3 hours in queues.
Two days later they decide to have a road census. More queues.

Please respond if you care about Penyffordd remaining a village.

"Just to let everyone know, the Hawarden Road app is on the planning portal and is now open for comments - none of the documents are visible - but we have untl the 21st April to comment - spread the word!

In the article I think they mean the Emmanuel Church half way up Vounog.

I understand Clive has resigned as a councillor for Penyffordd Community Council.
Most probably old news.
Google and Penyffordd Council website doesn't give a clue.

I also understand that certain longstanding cllrs are standing down and there are new younger candidates ready to stand.

I can remember when the balance of power was a follows.

On an international perspective
Hope Geert Wilders does something in today's Dutch elections.
A very brave man who has to be surrounded by bodyguards all the time.

postscript: Penyffordd Community Council Meeting 9th Nov 2016
"The Chairman informed the Council that unfortunately Councillor Dr Clive Weed formally resigned from his position on the Council with immediate effect. The Chair wished to thank Mr Weed for his years of hard work, loyalty and input. He will be sorely missed."

Trouble up road....
When I first bought my house 30 years ago BT attempted to put a phone box outside our house.
Also a magnet for youth and others.
Mrs Hibbert the previous owner managed to stop them. BT had done a phonebox base and it was ready to go.
at 13:17 1 comments

I presume it is a given that Cllr David Williams will be standing for County Council.

It would be good for new faces who have enthusiasm to stand.
Time for those long standing community cllrs to stand aside.

Penyffordd Community Group now give "added value" to our local representatives.
This is not an uncommon situation. Many such groups exist throughout the United Kingdom.

postscript Cllr Jeff Priddin will be standing as well.
at 12:41 1 comments

Hopefully horizontally and not vertically. They need a new mill and re connection to the rail networks. Perhaps the materials for cement process could be railroaded in? That would mean less HGV.

Here's a horizontal one.
https://en.wikipedia.org/wiki/Cement_mill

A vertical one here
http://www.cementkilns.co.uk/ck_rmp.html
Gets a bit technical at the bottom of the article discussing methods of controlling automatic production.

Prompt gamma neutron activation analysis seems to be the way things have gone........
This is clever stuff. Neutrons are fired through the cement dust to help control process.
https://en.wikipedia.org/wiki/Prompt_gamma_neutron_activation_analysis

This might not be happening over the road. Just speculation.
If you want to get up to speed with neutrons Wiki is your friend also.
https://en.wikipedia.org/wiki/Neutron
at 18:57 0 comments

"Can you please publish on your site that starting on the 1st of April there will be a service to the Surgery at Buckley. This will consist of an 8 seater mini bus pick up points will be Vounog Hill Bistre Close St Johns Church Penyymynydd and Dobshill.I will advise you of the times when the County Council confirm them."
at 16:02 0 comments

A very well attended meeting. Standing room only at the back. The future options for the community were put before those that were present. Good to see support from Dobshill.

A very well presented meeting with projection slides and explanations of what action needs to be taken. Lots of questions from community members present.

Penyffordd District is fighting over development. Flintshire are planning to build twice as many houses over the next 15 years than are needed ( more on this later ).
We are building for Chester which is against Welsh Law, this must stop.

Good to see County Cllrs Cindy Hinds and David Williams at the meeting.
It would have been good to see Penyffordd Community Cllrs at the meeting even though they had their monthly meeting in the Institute.

What are Penyffordd Community Council doing to prevent the proposed building onslaught?
Will have to look at their website.

Only problem being last night's council meeting minutes will appear in a months time..........
This setup is 20th century and not acceptable in present times with events happening by the week. 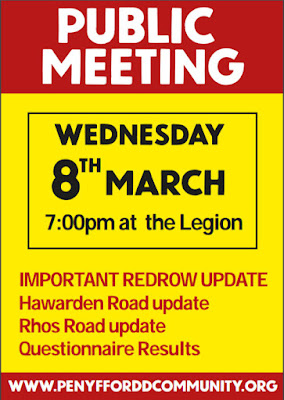 Wellbeing Act
Flintshire County Council have published a consultation document on the Wellbeing Act relating to Flintshire - you can view the summary, local data and the full document online here:
http://www.flintshire.gov.uk/en/Resident/Council-and-Democracy/Flintshire-Public-Services-Board.aspx

The most interesting bit we have extracted - it basically describes all our ( edit Penyffordd district ) problems in one short section:

2.26.8 Between April 2006 and March 2016 the average completion rate for new dwellings and conversions has been around 405 units per year. The economic downturn in 2007/08 saw a depression in the construction industry, which reduced housebuilding rates.

2.26.9 This reduction in housing completions continues across most of the country, but in Flintshire the past few years have seen exceptional completion rates fuelled by large Unitary Development Plan sites originally identified back in the 1990s being developed. They present a finite land resource for new house building, and once the allocations are built on they are gone. These sites could potentially lose their housing development status as the imminent production of a new Flintshire County Council Local Development Plan (LDP) reviews land allocations, and so there is an incentive to develop sooner rather than later.

2.26.10 Arguably, the recent high build rates could also be due to developers ‘managing’ the market and local supply, particularly given Flintshire’s current position ‘between plans’ and an inability to demonstrate a 5 year land supply, which opens up the possibility of speculative housing sites being promoted. Flintshire’s proximity to areas on the English border which see high housing demand but have restricted land supply also makes the area attractive to the large housing developers, particularly in the absence of an LDP. The neighbouring Welsh local authority of Wrexham also has limited housing land availability, which adds to the pressure on Flintshire. Once Flintshire’s new LDP is produced this speculative development will be curtailed.

2.26.11 The rate of new housebuilding seen in the last three of four years is not thought to be sustainable as there is doubt about long term capacity of developers, particularly when neighbouring local authorities produce their own Local Development Plans (including Chester and Wrexham) and release land for up to 40,000 homes within similar time periods over the next year or two.

2.26.12 Based on the past building rates method over a 5 year and 10 year period the land supply amounts to 6.6 and 8.1 years respectively. The Council is of the view that past building rates method clearly show the actual level of supply, compared with what the development industry is currently achieving on the ground, and is more reflective of recent economic conditions and reduced levels of house building.

In the above link it states "TAN1 requires each local planning authority in Wales to ensure that sufficient land is genuinely available or will become available to provide a 5 year supply of land for housing. Where a local planning authority doesn’t have an adopted Unitary Development Plan or Local Development Plan (LDP), it is considered not to have a 5-year supply and cannot publish a Joint Housing Land Availability Study, and this is the current situation in Flintshire."

So do we have a qualifying land supply?